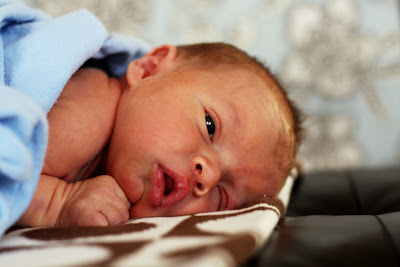 Roman my dear, you were 21 days ahead of schedule. Perhaps you just like to be punctual as you arrived on the first day the doctors could call you full term. And though all babies are essentially born the same way, there are some highlights that made your debut quite memorable.
**
When labor began, your father was an hour away. The only person that was answering a phone was Daddy's unsuspecting, 20 year old cousin who most definitely showed up at our door with frightened face, weary of what he would find (and surely unskilled in the art of transporting a laboring woman). Luckily your auntie called and sure enough, one extremely pregnant lady accompanied another extremely pregnant lady to the hospital. We chuckled to think what the admitting woman thought as we both waddled toward her desk.
**
Also, did I mention that the doctor wasn't exactly the one who delivered you? It was a nurse. A young NEW nurse...and it was her birthday too. I don't want to be too dramatic, but while I was panting as instructed (so as not to push) the nurse ordered grandma to run out into the hallway and call for help after Daddy hitting that little call button elicited no quick response. Roman, you actually slid your way into this world. No additional help from me! The doctor did however arrive in time to deliver the placenta, which has me hoping we qualify for some sort of discount.
**
Really, it goes without saying that your brother and sister are ecstatic about having you around. Upon seeing you, they decided that you would be "Donatello" of Ninja Turtle fame (Zach is Leonardo and Lily is Raphael). Lily has to know where you are at at all times. And if we are getting ready to go somewhere they ask, "Is Baby Roman coming?" Zach is still a little miffed that your middle name is not Allison, but as he gets a bit older, I think he'll understand, and I know you'll thank me.
**
In all seriousness, you are a strong little spirit. I just sense it, and I could before you were born. Which is why I was so certain about your name. I know it will represent you well. It's funny how meeting you seemed so natural. "Of course this is Roman" I thought in those first precious moments spent gazing at your little face. 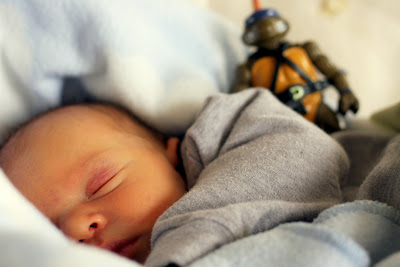 Sweet baby, and a great story! I'm so glad to hear things are going well.

Wow! That's a great story! Tara he is just adorable! I didn't realize he was so early! We wish we were there to pamper you and kiss his little face, for now this will have to do!

That is a great story. Glad you made it to the hospital. Congrats on such a sweet beautiful looking baby. Love to you and your family!!!

SO SWEET!! My G saw the pictures and said "He is so cute!" I love the Ninja Turtle name. Also, the middle name from Zach is cracking me up!! We miss you guys :)

What a great story! I always love hearing these. Does this mean that Dave didn't make it in time? And no epidural? You are amazing Tara.

He really is such a beautiful baby. That last photo just shows how perfect he really is.

what a great story! i loved reading it. love that lily and zach already have his ninja turtle picked out-- so cute! so i assume you did it without an epidural?! did you want to die??? oh boy, i'm getting nervous. :) love you sis!

(roman is very very VERY scrumptious, by the way)

that is such a cute story! oh little Roman is so adorable! i bet Zach and Lily are having so much fun with him.

So, precious, Tara! I'm so happy for you and your family!

uh oh, lest anyone think I am braver than I really am...let me clarify! These were just the "highlights" the play-by-play went something like this:

get to the hospital...dave arrives...epidural, thank you....labor labor labor waiting (peacefully I might add), Dave cracking a million jokes and the contraction monitor going crazy because of my laughing... and then once I was at a 9 they decided to break the water.

I TOLD the dr. how fast my babies tend to come after the water breaking! And I TOLD them how I pushed 1 time with Zach, and like 3times with Lily...but I guess the Dr. had her own ideas...because she broke my water and then decided to leave the room.

I wasn't even pushing.
May I say that it is NO FUN to "hold a baby in"...sheesh...and that poor nurse. To her credit, she was trying so hard to stay calm.

what a precious little guy with a perfect little head and face. you are truly a lucky gal!

He is just beautiful!! I'm glad things went so smoothly! I hope you are feeling healed and as rested as possible. Roman will surely thank you for going against his big brother's name choice. Oh, there's nothing quite like having a new baby! LOVE IT!! Congrats!

No, holding a baby in isn't fun at all! I'm so glad it went well for you anyway and that Dave was able to make it!
Cngratulations on another beautiful addition!!!

By the way, we hope all professional persuits are going well, also! Keep us posted!

I feel like I am reading a novel, a sweet, sweet novel. What a precious gift. I hope to meet him someday, now that you're in Kansas City and everything :)

Your kids are the luckiest kids in the world!

He is such a beautiful baby! Welcome to the world, little Roman!

He is soooo cute and precious!! What a sweet little baby! And that was quite the labor story!

So glad he's here! I love the ninja turtle in the picture!

Congrats Tara! He's so gorgeous! Enjoy your little one!

Congrats!! He is such a cute, sweet, little thing!

I love your posts Tara! You make me all teary-eyed. The sibling relationship is just so precious. My kids are always asking about where the other ones are too, and in our household, everyone is a different Transformer =) We need to go out together. You're the one who just had a baby, so let me know what works for you!