My son the pacifist. 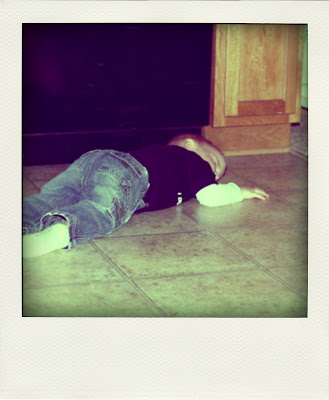 Roman is at that age.
He knows exactly what he wants,
and realizes that many times he is powerless to get his way.
Enter: the two-year-old-tantrum.
But Roman has certainly perfected the whole thing.
Because he doesn't really know how to throw a true tantrum.
He doesn't whine, or scream, or kick his legs like most of his peers.
Instead, if something is unsatisfactory to the point of tantrum,
he drops prostrate to the ground...
squeezes his eyes shut as tightly as they will go...
and then doesn't move a muscle.
not a sound.
for at least a minute.
(or until you giggle)
Various surface materials are of no concern to him.
Concrete, tile, carpet, linoleum...it's all the same really.
And for some reason, besides being totally amused by it,
and madly in love with the little guy for it,
every time I see him do this I can't help but think...
he would have made an outstanding addition to the civil rights movement.
Posted by thepainterfamily 15 comments:

Happy Birthday to me!

(the remains of our St. Patrick's Day cake, but a festive stand-in for a picture-less post)
I have a lot of updating to do here in this little online journal.
BIG things, but one at a time I suppose.
I turned 30!
I feel great. And not sad, weird or old.
(I tease my husband because he did not like turning 30)
It's a milestone sure, one that I am more than happy to make.
I celebrated with my family on Sunday,
and went on a hot date with my husband yesterday (my actual birthday).
We ate fish (thankyouverymuch) and then he took me shopping.
When I got home I discovered my mom had folded the mountain of laundry
that was piling up in my home.
And that right there could have been the best birthday gift ever.
Wait, I lie.
I received two emails from my parents,
both expressing their feelings and memories of the day I was born.
March 21, 1981.
30 years ago.
Time flies.
Posted by thepainterfamily 13 comments:

Second only to Micheal Jordan

Zach's basketball coach was patient, organized and enthusiastic. At the very first practice he said, "Welcome parents, our team's name is going to be "Chaos"...and you'll see why in just a minute."
It was a great season. I could hardly handle the cuteness of those little kids lined up in their shorts and shoes.
Zach took everything very, very seriously.
(including the gatorade and snack afterwards:)
He practiced hard and couldn't wait for Saturday games.
And he loved watching his uncle Kyle (who plays in college) each week as well.
He knows every player's name and number.
You could say that basketball has been on his brain this winter.
As evidenced by one of my favorite things Zachary has ever said.
While driving with David he commented thoughtfully,
"Dad, Micheal Jordan is the #1 basketball player in the whole world.
Then #2 would probably be mom.
And Kyle is #3.
(pause)
Actually, Kyle might be #2 because he is a boy."
Ahhh, to think that in his mind, (if only for a moment), I am second to Micheal Jordan.
I love it.
Posted by thepainterfamily 11 comments:

The BEST kind of "before" and "afters"

I don't often post shoots I do for other people, but I keep coming back to these cheerful colors and that beautiful little boy.
Congrats Angela and Matt!