April April where did you go? 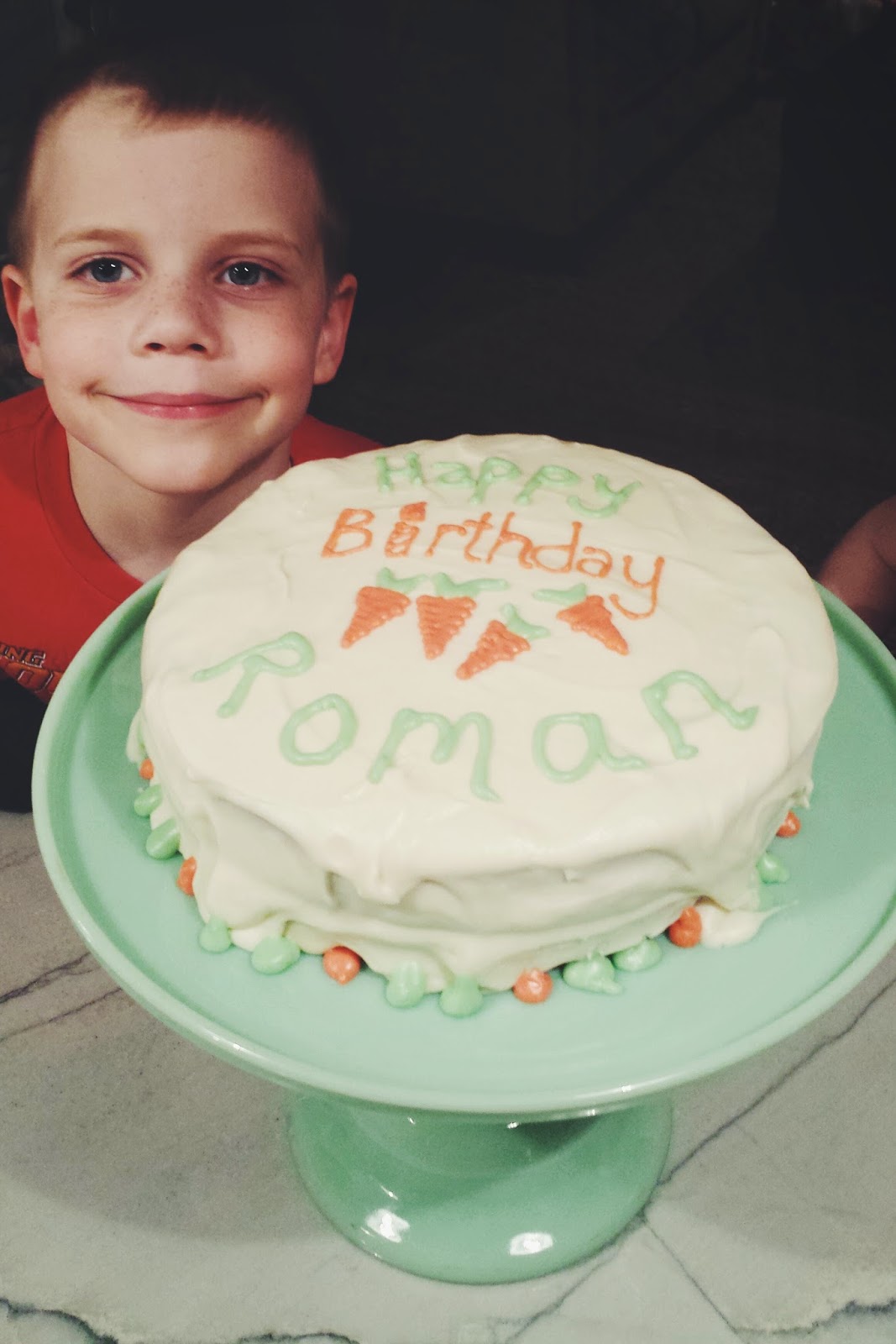 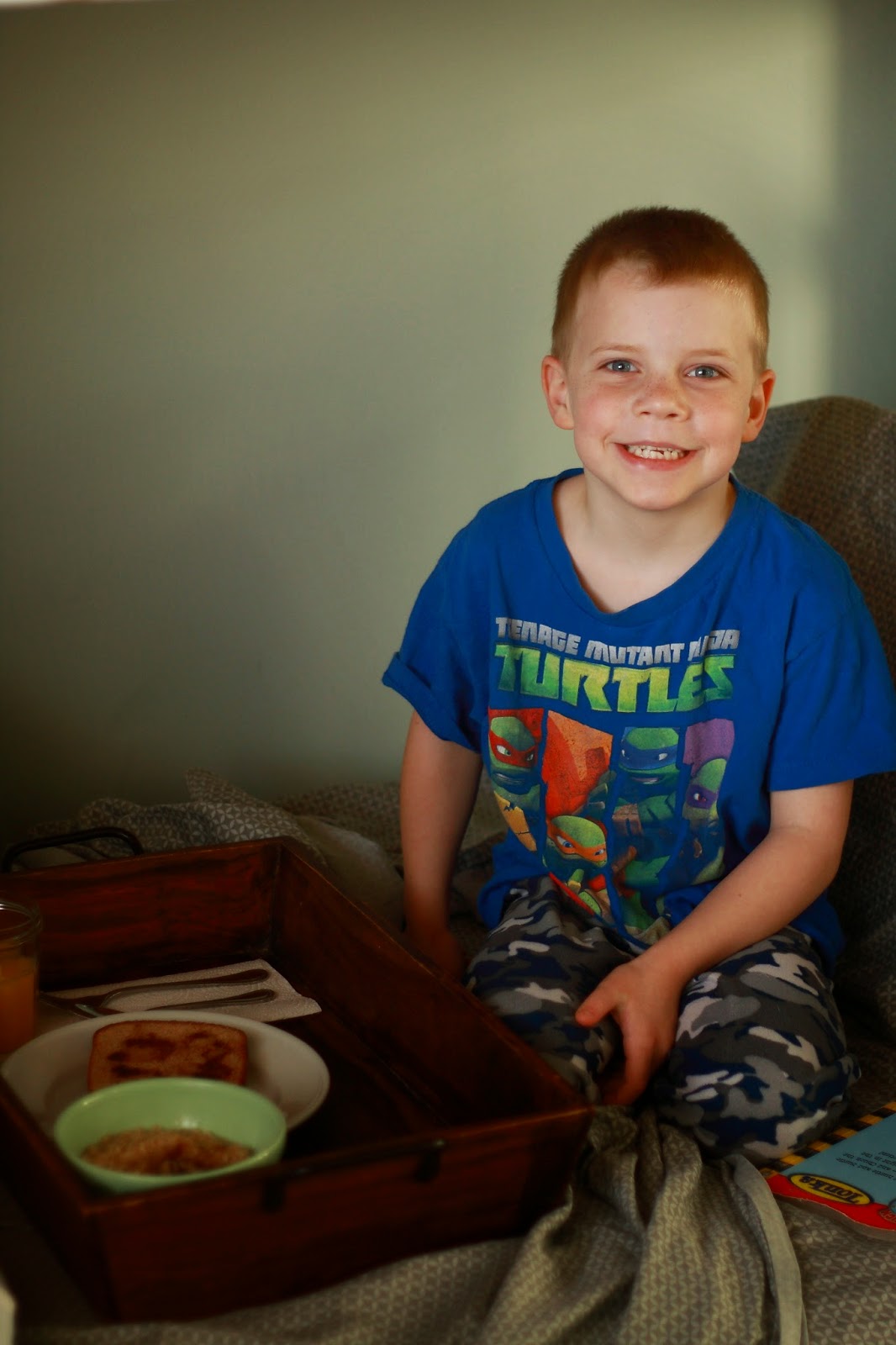 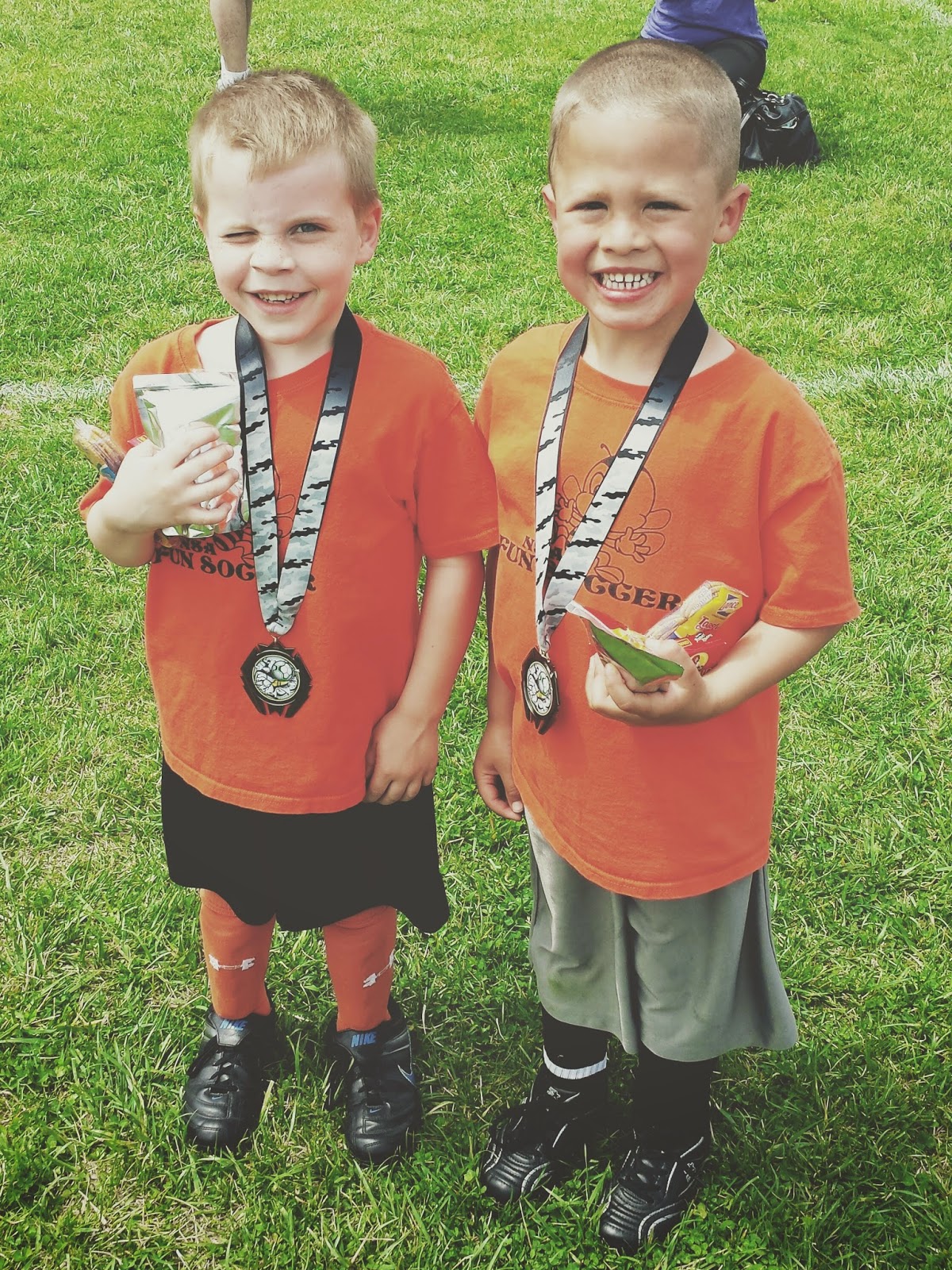 April was a big month for Roman!  He turned 5!  He wanted breakfast in bed, he wanted a carrot cake, and he wanted a transformer.  Marquise and Roman had a birthday party in the park.  They are two adorable best bud cousins.  (Shared a due date!  But born 2 weeks apart.)  They also wrapped up their first soccer season together.  Oh dear.  They were unstoppable.  Very very literally.  Although no score was officially kept, they knew that they won every single game haha.  It's just what comes from having big brothers.  Poor kids can't just start with "fun" soccer.  They were out for blood from the beginning.  I woke up on the day of Roman's first game to hear Zachary putting Roman through drills designed to get him ready for his debut. 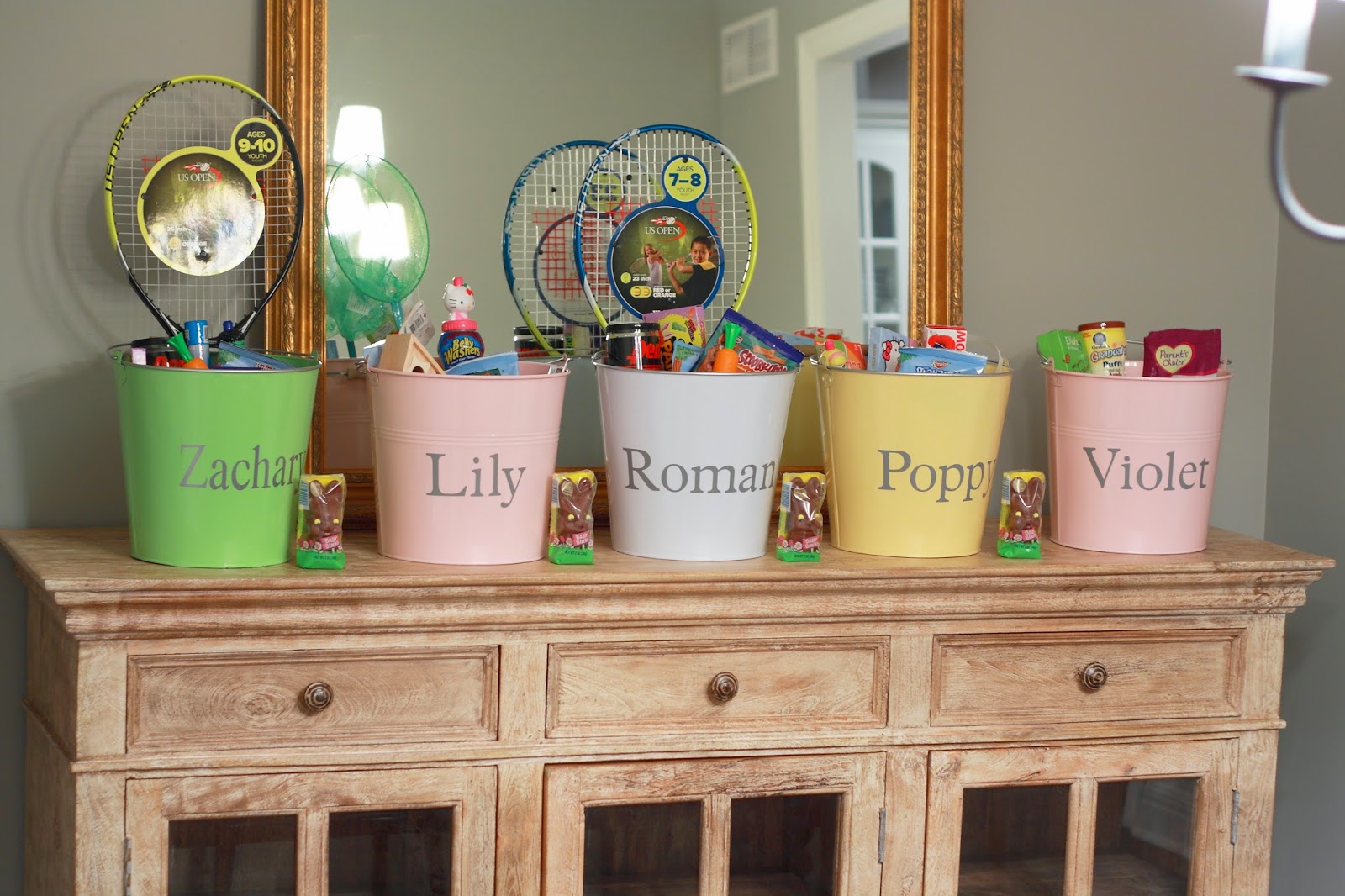 And then it was time for Easter.  I felt pretty good about getting their buckets done.  I searched high and low to find buckets that were similar in size to match the ones I bought for the first 3.  Thank goodness for the internet.  And tireless google searches. 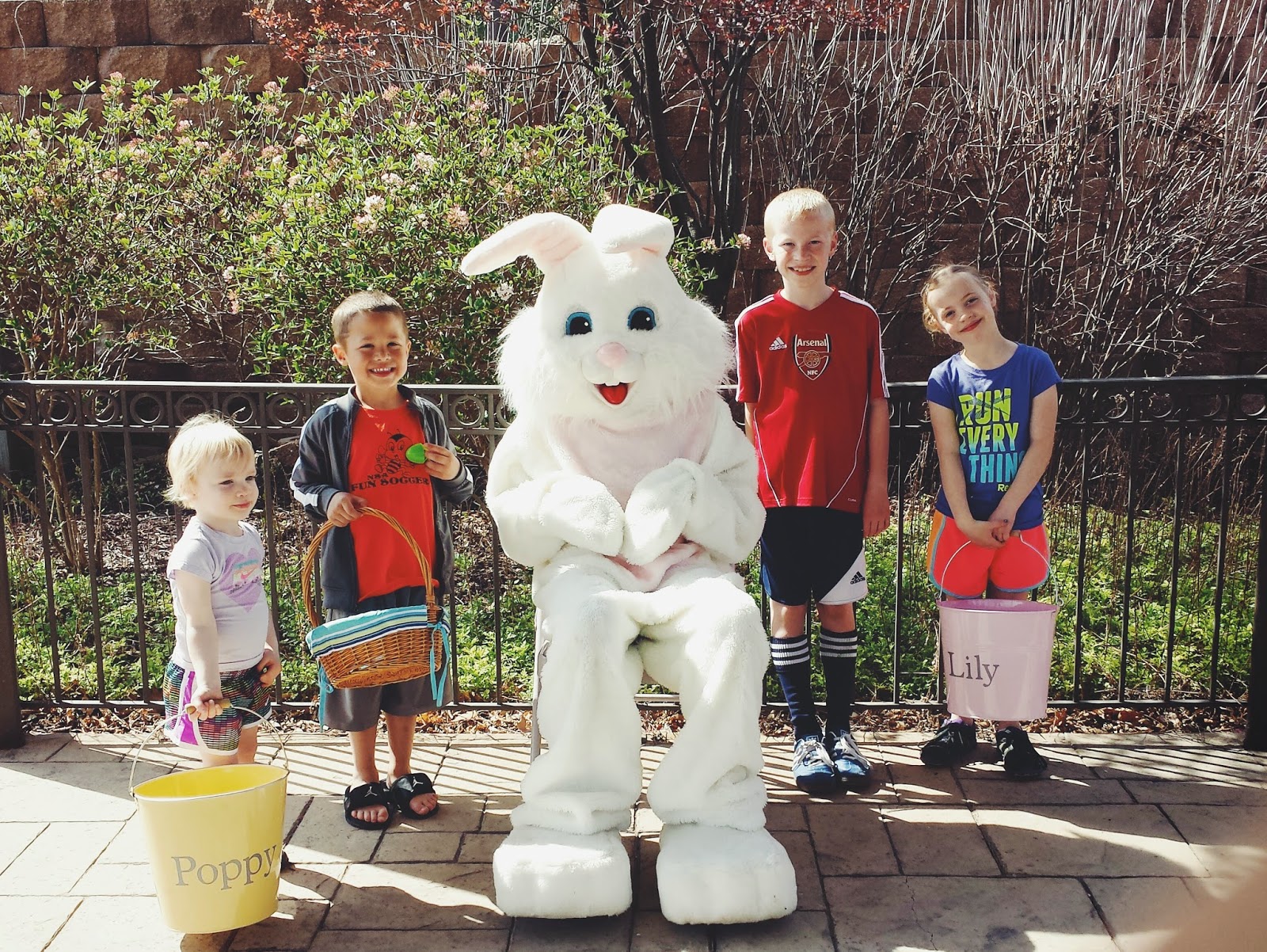 Easter Egg hunt in my parents neighborhood.  I personally just laughed out loud that this bunny was so in character...look at his hands!!  Held like that for countless pictures with children no doubt hahahaha.  But what would the alternative look like?  Bunny with hands on knees...or hanging down by his side?  I'm guessing this is the sort of thing that can only be learned by trial and error.  Or maybe helpful instructions are provided when you rent a bunny suit?  I digress. 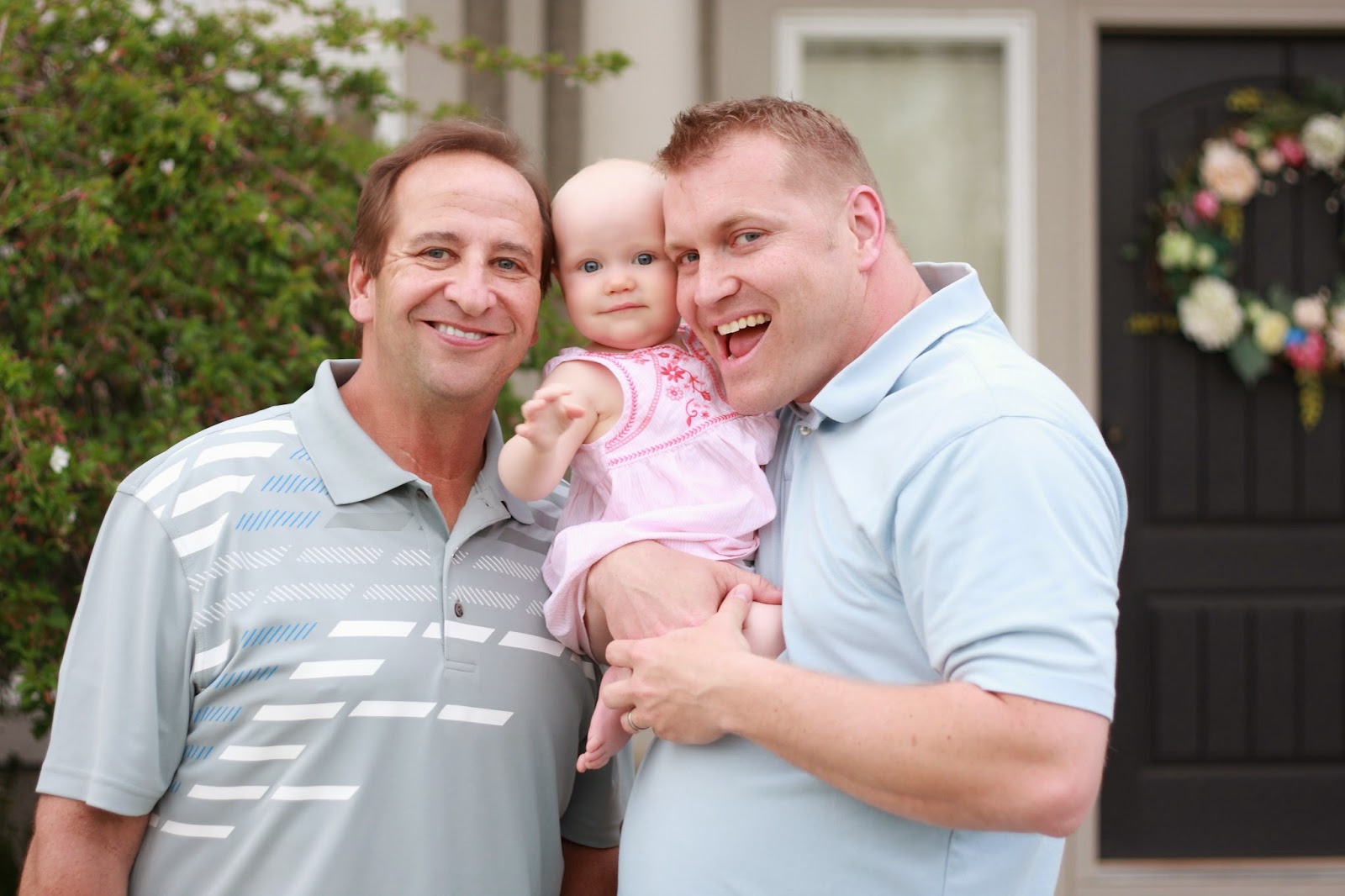 Easter Dinner and Egg hunt with the family.  Violet is super duper attached to me..but she is taking a liking to her da-da too.  Just this morning I was changing her diaper and she heard the garage door open (it was actually just Poppy) but she started in with "da da....da da....da da" because she knows that hearing that sound means this fun guy is going to pop in, find her, and kiss her :)  It was pretty cute. 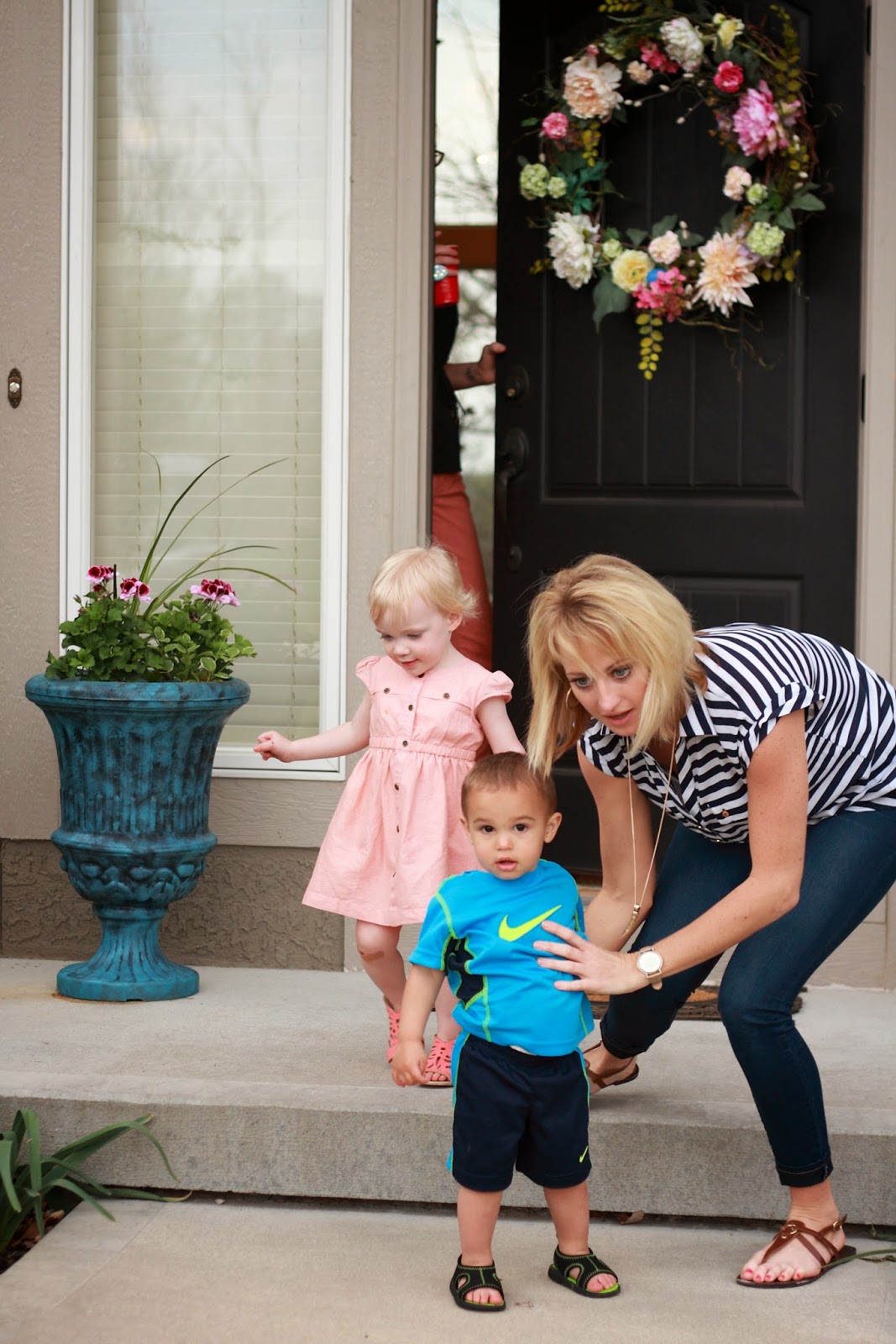 As always, we follow a staggered approach to cousin egg hunts.  Toddlers first, then the middle guys next and the big crazies are released at last.  It's always pretty funny to see them bolting from the door. 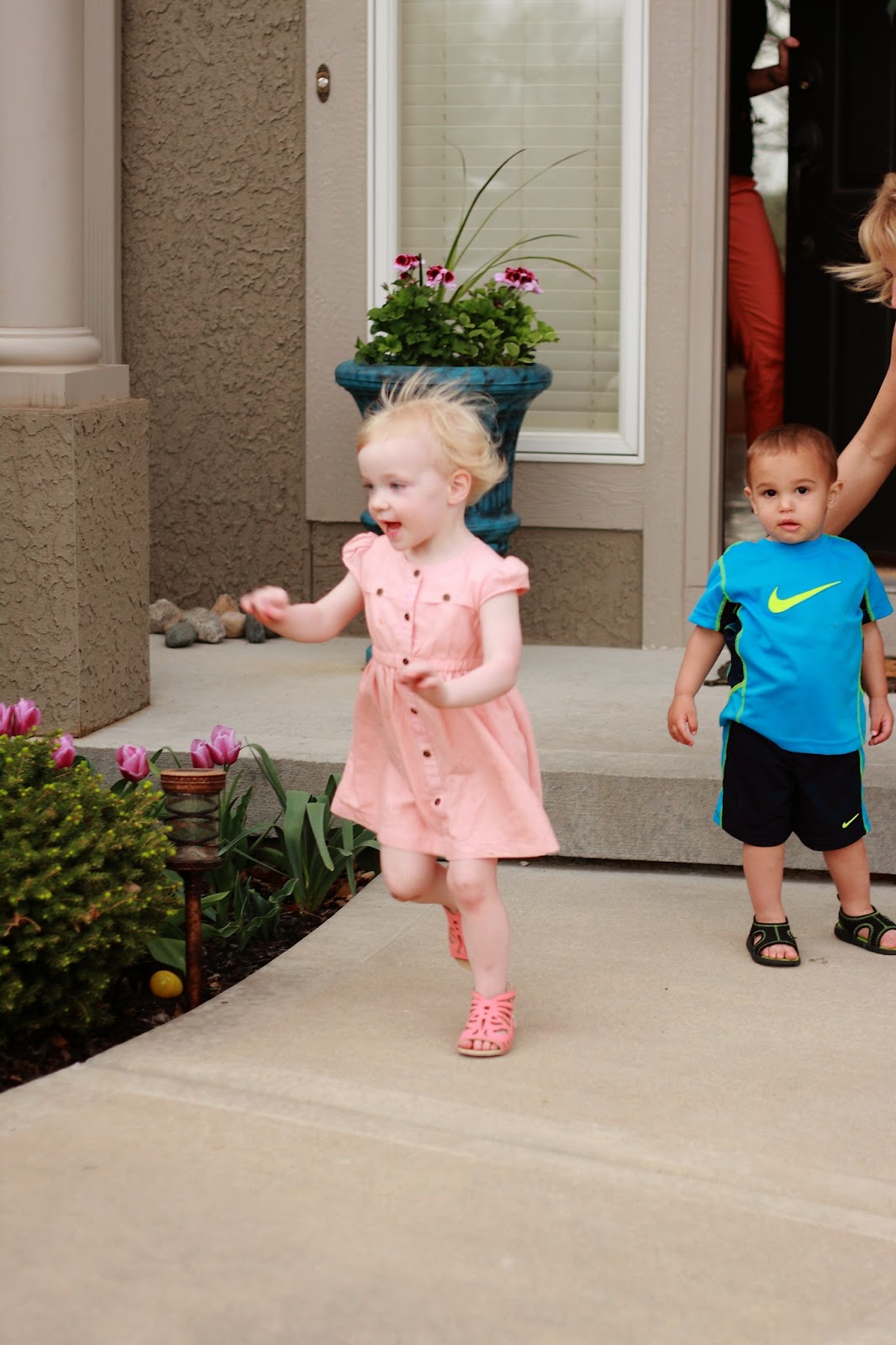 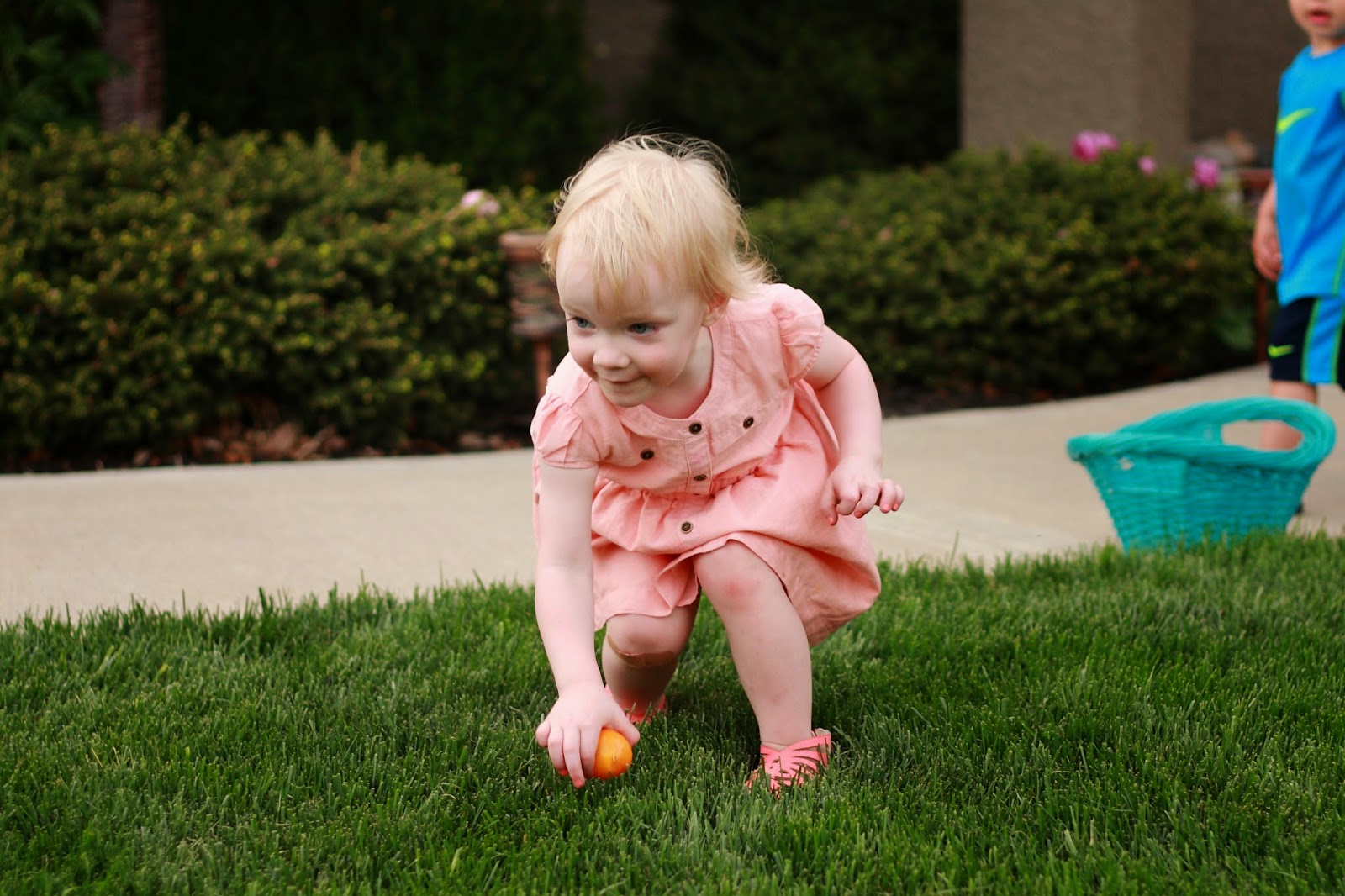 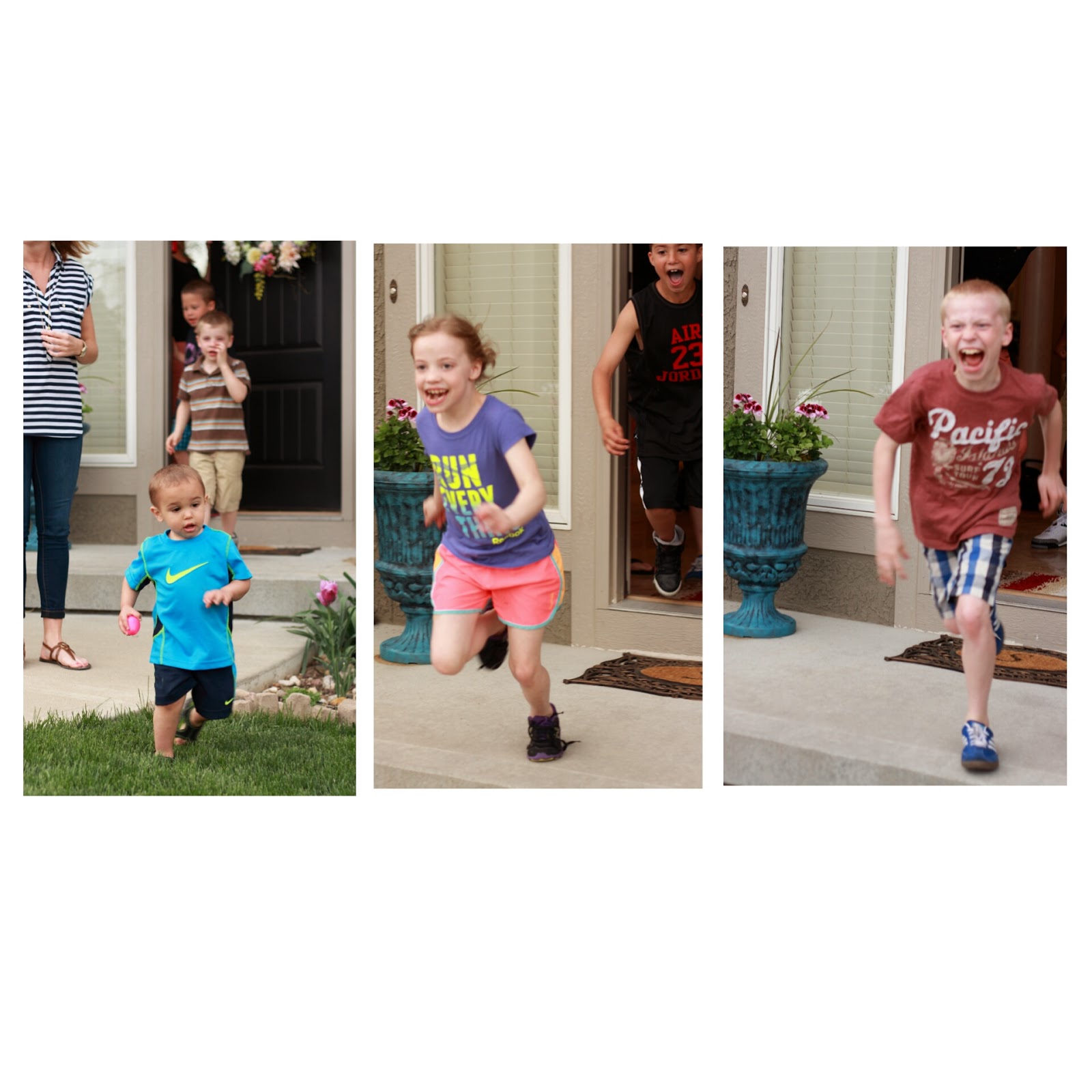 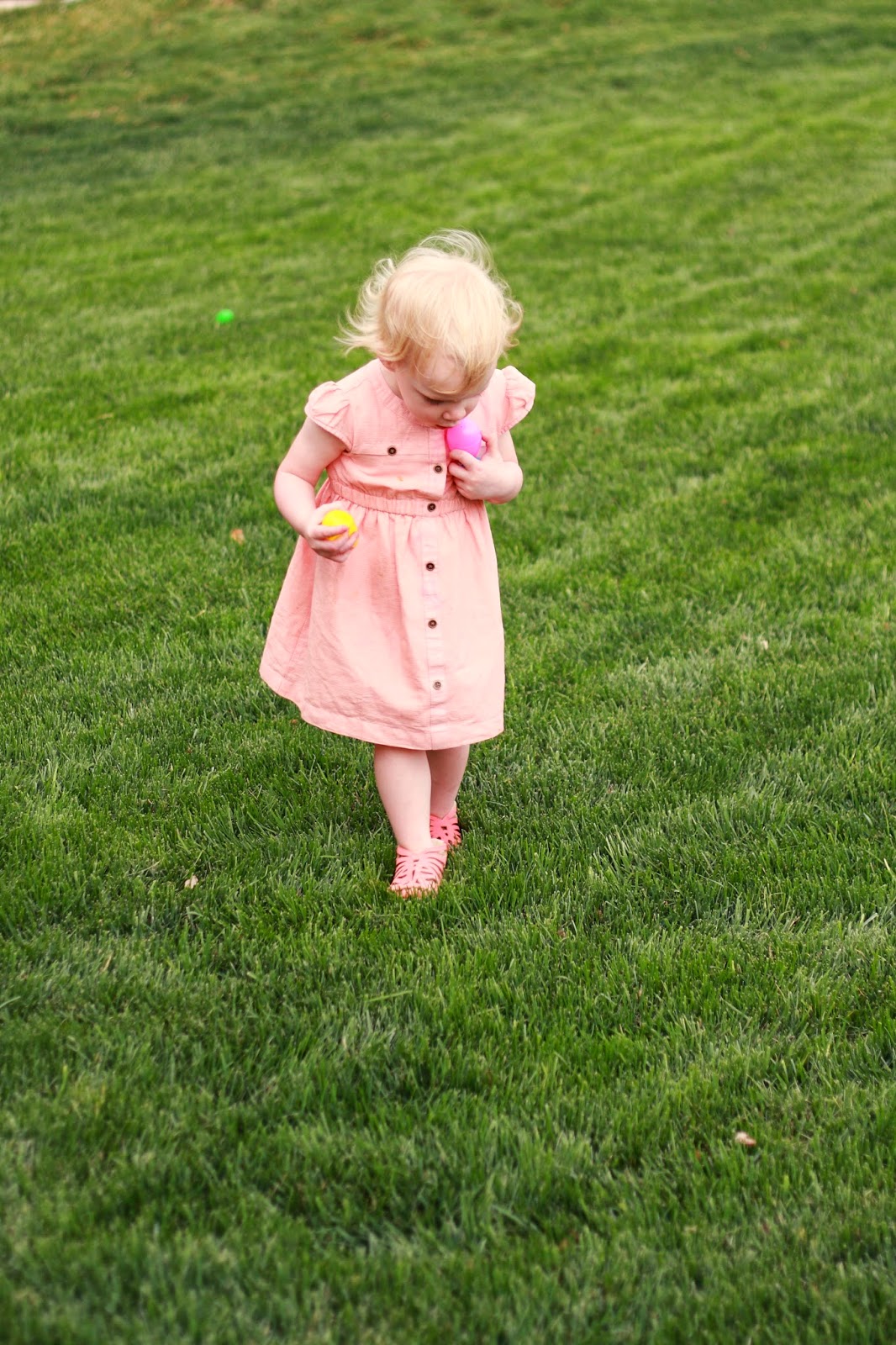 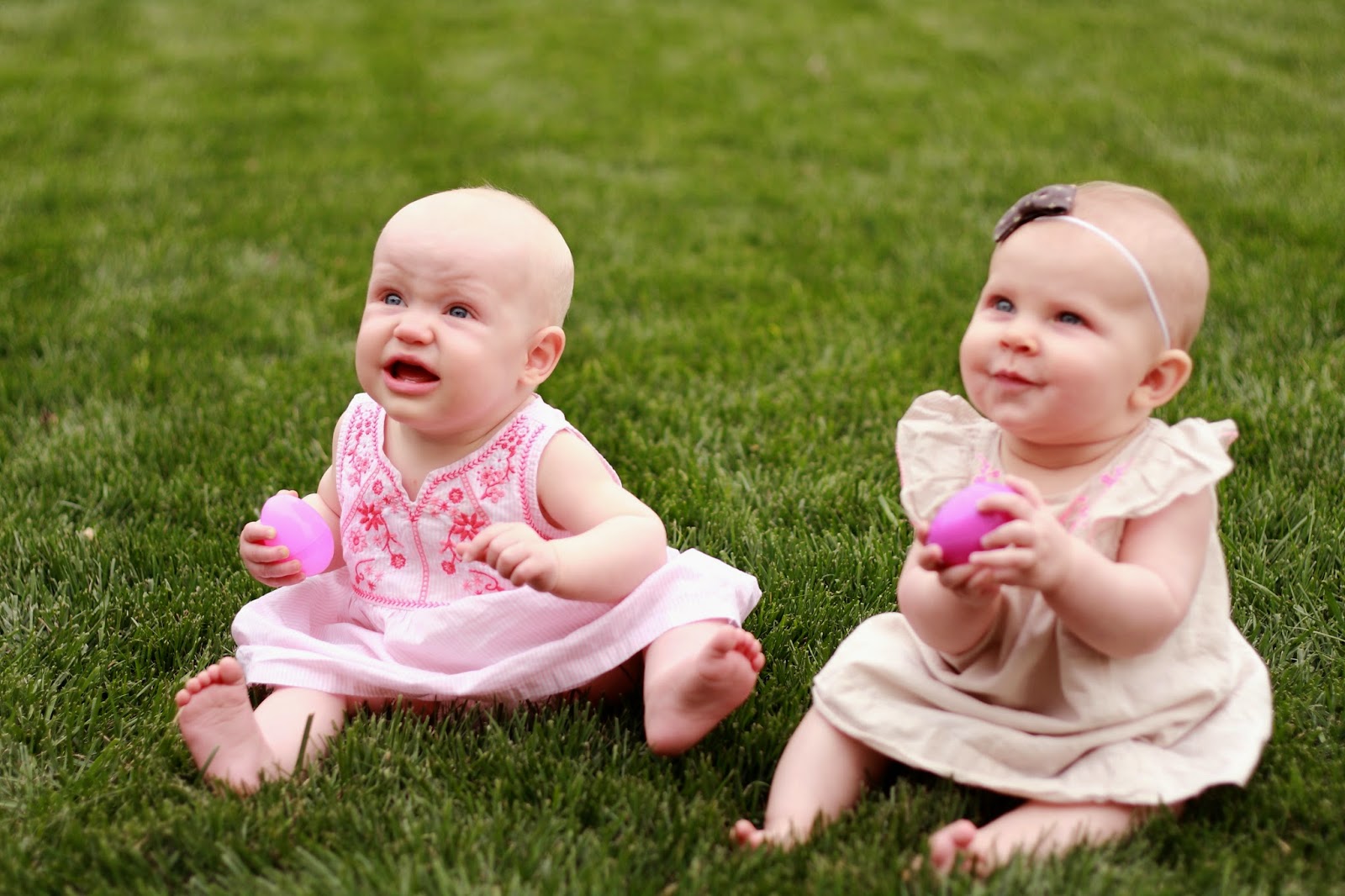 And finally, these little Easter chicks...one of which was not a fan of the grass.

Ok, not entirely "final".
I will mention one other April happening.
Starting at the end of last year, I began feeling this great urge to get a little more prepared for emergencies.
I know, this is kind of a bummer way to round out a post.
Rest assured I don't think the world is ending...
But eventually I started having dreams...and just all signs pointing to...DO IT. like NOW.

And one day I couldn't stand it any longer, I literally just dropped everything I was doing and organized these intense 72hr kits for everyone in our family.  It took over our dining room for a couple days.  I would look out my window in the evening as I was feverishly working and see neighbors walking their dogs and waving to me and prayed they didn't think I was crazy because I was surrounded by a room full of survival bars, packets of water, emergency blankets, ponchos and flares and flashlights and, and and...

Really though, my kids were hungry and I was like, "oh sweetie, grab a cheese stick and an apple."
I ordered supplies from websites, shopped Walmart, and finally rounded up a bunch of stuff we already owned but that has been jumbled and bumbled throughout moves.

And now I can sleep at night.
Amen.

"It was actually just Poppy". I'm laughing so hard at that. I love that girl!

I love when you update :) we're coming to town Memorial weekend. I will soooo see if you all are around for sure. Would love to finally meet you in person. Ps I'm sooo with you on the disaster kits! Seriously went to a meeting last week and ordered my water yesterday....,has a shelf life of 50 years lol... Will be writing about it on FBG so if you have a good list please share!

this post made me really happy. life is so great, isn't it? i'm glad to see you guys are doing well! even if you are a crazy "end of the world" person. KIDDING KIDDING. we took an inventory of our 72 hour kits recently but never did anything about it. gotta get on that. you guys are so great.