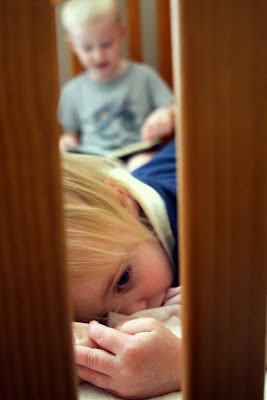 My kids refer to naps during the day as light naps. Bedtime is called dark nap. Today, I caught Zach in Lily's bed during light nap. He was reading her a book all about sharks, and he kept saying something about "sharp, sharp teeth". Whatever he was saying worked, because she fell asleep soon after this picture was taken.
**
There are only 5 more dark naps before we move. Back home. Kansas City. Gulp. I've read articles before that list the most stressful events in life. Usually somewhere near the top of the list are things like job change, moving and new baby. Bummer that we're experiencing them all at once. It's sort of complicated that way.
**
You know what I'd really like? I'd really like to fast forward to next March. March 2010. Because I can remember so clearly March 2008. Full of hope. Excited to arrive in our new city. Searching for houses and dreaming of settling down, making a little home. 365 days later if feels strange to see Houston with such different eyes. I mean, the trees and shrubs are blooming just like they did last year, but other than the foliage, nothing else was quite as expected. Not bad, just different. I don't do different very well. Funny how the pieces of life can fall in place, out of place and right back into place.
**
Of course, even amidst all the change and anxiety, it's hard to ignore my blessings. Namely the people I live with and love so dearly. And so, it is sometimes with an exhausted sigh that I give in to the idea of letting my plan go, letting another take root...and just being grateful to wake up from each dark nap to see and be with the faces I love.
Posted by thepainterfamily

another move, and preggo ... big gulp. exciting though that you're heading back home... buy a house, settle, breath. the market's great for buying!

Whether you mean to be or not, your sweet family is an inspiration! We just love how real you are and how you find the beauty and joy in life and are able to share it with a picture and a few words!! Good luck with everything!!! Let us know if and how we can help! Love ya!

I had no idea you were moving back to KC! And so soon. What part of KC are you moving to?

I've moved to a new house during the 7th and 9th month of my pregnancies. It was kind of nice actually because everything was done for me. No one would let the pregnant lady lift anything so I just sat down and directed people :)

Maggie is sooo excited you guys are moving back!! I know it will all work out for the best...Heavenly Father only wants the best for us...it is just so hard to see what is "good" for us when we are in change.

Oh we'll be praying for ya'll - us too :) It's nice that someone else is doing what we are doing at almost the same time. This is a challenge we will win!!! (too much watching Brandon play Mario Galaxy...) I feel like our guys are the perfect team. (long distance team of course!) They bounce ideas off of each other perfectly. He talks to Painter more than he talks to me!!! I'm okay with that - for now :)

Tara It was SO great spending a little time with you today before you up and leave us! I was telling Christy it seems like I know you so well but in all actuality we have only done things maybe a dozen times!we have just fallen in love with your little family so fast! We are going to miss you so much! you are incredibly talented and just an amazing mom. I really wish you would print your blog thoughts into a book! a painters lessons on life! I'd buy it! xoxo

oh boy. change is so hard. don't i wish things could work out exactly how i've planned in the past! i guess that's life. best of luck to you guys. i can't wait to hear how everything goes with the move, the baby, the job change. you are so amazing and i just know things will work out for your little family! you will be missed here in houston!

Hi, Tara! Remember me? ;-) Vanda sent me the link to your blog and I am loving it! Is what I read true? You're moving back to KC? Good luck in your move. I'm sure it's stressful - I can't believe how much you have moved and have "started over" but you truly have such an amazing spirit, I know everything will fall into place for you.

I didn't know you were moving back to KC! I know it's got to be hard with all the changes and being pregnant during a move, but I also know SO many people are VERY excited to have you back home! Luv ya! -Jenny

Wow, we are sooooo excited to have you back in KC. PLEASE call us so we can help move you in and/or watch the kiddos. I don't remember the exact day, but I know it's soon... so make sure to call me!! It definately is stressful making any ONE of the three big changes ahead, but you have such great family and friends to lend support and you are one of the most optimistic people I know. Good luck!!! We can't wait to see you!

Oh, Tara. I don't even know what to say except that you are wonderful, your family is amazing, and I am sending love and happy moving thoughts your way.

There is no place like HOME! I cannot wait for you to move back...for selfish reasons of course. Life is funny...plan to be surprised...isn't that right?
Love ya!

Tara -- Everyone at Lewis and Clark is very excited that you are coming home!! You are amazing and an inspiration to all of us! Can't wait to give you a hug!! David can go fishing with Ron!!
Smiles -- Vanda

I didn't realize you guys were for sure making the big move back to KC! I am happy for you, but would be lying if I told you I wasn't jealous!!
I hope everything goes smoothly- I know how stressful it can be. Good luck and hang in there.

tara, good luck with your new adventures! change is hard, but good. it is hard to see the blessings through the storm sometimes. at least you're going home, no?? :)

I didn't know you were moving back! EVERYONE who is ANYONE is moving back to KC!!! :-) So excited to be able to hang out again! Love ya!

Wow!! Where is david going to work? Are you moving to the same place?!?! I'm glad something worked out so you could move back =) We are still seeing where this will take us... Have lots of fun in KC!!

You're moving back to KC?! Oh my gosh!!! If you EVER need a babysitter this summer, you know I'll be there! Where are you moving to? OH, and how did you get your blog header to be so cute? I have a lots to learn about this whole blogging thing!