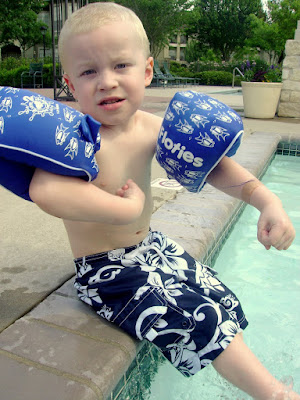 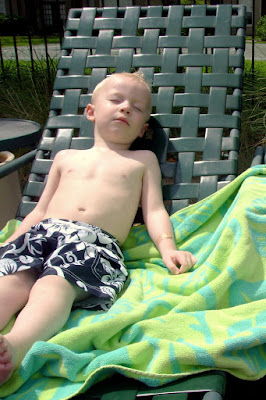 You don't have to tell this kid to relax

This tag involves listing 8 things about the Painter kids:
Zachary Cannon Painter - age 3
1. Zachary loves to "teach" Lily new words, (and she loves to talk). Often the following conversation can be heard in our house,
"Lily say 'PRIN'"....
"PRIN"....
"Good! Lily say 'CESS'"...
"CESS"...
"Good! Now say 'PRINCESS'"
"PRINCESS"
I just love that he breaks the words down into syllables for her!
2. Zach is very good at letting us know he loves us. It is always such a wonderful surprise when he will say, "Mom, I yuve you" (L's are still hard for him). Tonight when he was getting into bed he told me that he "yuves our family" and listed each of our names.
3. Zachary enjoys playing basketball. He is really good at dribbling the ball around while running and it always amazes me the amount of time he will spend "shooting" the ball at the regulation size goal. It doesn't seem to discourage him that the ball never even gets half-way to the goal, he just continues to shoot and shoot and shoot as if each time is an "almost" there!
4. Zachary has two favorite songs. He loves 'A Child's Prayer' and 'I love to see the Temple'. He can sing the words to many children's hymns. He also loves to say the prayers around our house. He blesses his friends and family a lot. This part takes a long time because he doesn't want to leave anyone out. He lists his family by name and asks that they stay safe. He also is often grateful for his toys! 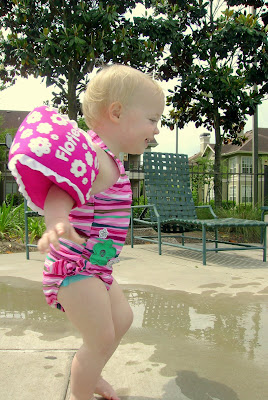 the entire time she was in the pool she kicked her legs and said, "kick, kick, kick"

1. Lately, Lily has been waking up from nap time before her brother. When we walk down the hall out of her bedroom, she puts her finger to her mouth and says, "shh, shh, shh...Zach" Her favorite thing is to go into his room, and watch him sleeping. She has a pattern. She stands at his bedside for about 30 seconds. Then she begins softly, "shh, shh, shh". It gets a little louder, "Shh, Shh, Shh" and finally, it's more like a windstorm, "SHH, SHH, SHH" If this doesn't wake him up, she has been known to resort to things like throwing stuffed animals at him.

2. Lily is a good cuddle bug. She gives LOTS of hugs and kisses freely. What I love most is that she doesn't just put her arms around you for a hug. She SQUEEZES as tightly as she can. Nothing better in the world.

3. Lily is fast. We call her "squiggle", and whenever she hears that, she will take off running to show you just how fast she can go. Her "show" also includes some crazy angles and her famous "jumps". Jumping is one of her favorite things to do.

4. This is a fun age because her language is exploding. There is not a word she won't try to repeat. I am also continually amazed at Lily's confidence in new situations. Nursery was a breeze for her. I love that she runs into the room and heads straight for the table with potato head people. (she knows the drill)...there is never any crying. I also love that when we come to the door to pick her up, she runs to me saying "MOMMY"! At the Library Story time, Lily hands her "ticket" to the lady at the door and walks right in and finds a spot on the floor. (I am usually telling her brother, "Its OK, this is going to be fun, why don't you go sit by Lily!") hehe! I find this part of her personality fascinating because I was so opposite as a child.

Thanks for the tag Alissa! I hope that anyone who would like to, will do this "tag". What a great snapshot in time. I enjoyed recording random facts and stories that might otherwise be forgotten! I know everyone has 'em...go on!

Your kids are so cute! I love reading the things about them on your blog. Thank you so much for sharing that part of your life with the rest of us!

Your kids are too cute! I really love hearing about how they are growing and learning. The pictures are precious!

your kids are dolls and you are such a great mom:) I wish we were swimming too:)

Aww, so cute! I can't wait until it gets warm enough so we can go to our pool here!!! Your kids are so sweet and cute! That's funny about Zach and the way he says love. Carter can't say his v's so he says "Lub" instead of love. So funny!!!!

Those kids are so adorable! Isaac had fun looking at your pictures, and wishing he was in that pool. Once we get settled in somewhere in NC, I will have to chat with you about the South...and those nasty bugs!

that was fun! thanks for that, i love reading about the little things that make kid's personalities. lily's "shh, shh, SHHm SHH" just cracked me up! and those pictures at the pool looked like such a great way to spend the day, i bet the kids had a blast- texas must be nice!!!

So cute! Just a couple of years ago Carter and Kimball were the exact same ages as your little ones. It does go by fast!

I love your kids! They are adorable for one, smart, and so sweet! Zach teaching his sister to say "Princess" is the best!!

What cute kids! And that's so nice that you have warm enough weather for swimming! I'm jealous.