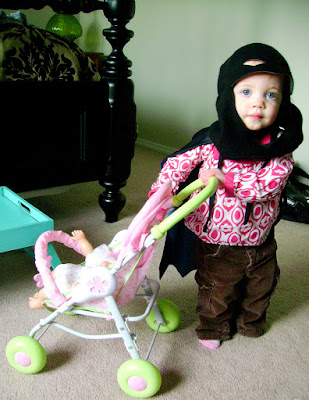 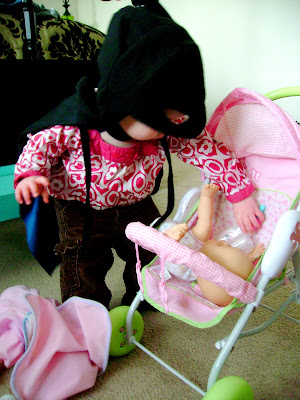 Lily. Second child, first girl. Makes for some exciting parenting, and an adorable personality. She's always been into cars and trains and doing whatever her older brother is doing. But lately, she has started to show interest in her dolls. She sleeps with her baby and wants us to tuck the baby in with her at night. The other morning she brought baby with her to breakfast, and after each bite of cereal, she would feed one to her baby. Admittedly, I was pretty excited to watch her push her stroller and carry her "diaper bag" with bottles, especially considering Lily is the only girl I've seen that runs around the playground yelling "Ka-Chow!" (don't ask...its a Lightning McQueen thing). So daydreams of princess costumes and kitchen sets began to take form in my head! Fun times! They were interrupted only by Lily, bringing a batman costume to me, and wanting to wear it. Ha ha! I think Lily makes one cute "batman momma"!
Posted by thepainterfamily

LOL!! I love that, it is so funny! Even batman had to have a Mom, right? She is just trying to keep all her bases covered :-) I love that she wore the batman costume while taking care of baby!!

That is hysterical!! What a stinking cute little girl she is!

This is actually Alissa. Sorry.

That is so cute. She does make a cute batman mama. She's just a well rounded little girl!

The cutest! Cannot wait to play with her when you guys come.

LOL....sooo cute. I love that Batman part...And "ka-chow" lol. that is all I hear. And he knows all the cars names, but he will never call the main one Lightning McQueen...It is always, "KA CHOW" ...anyways...I have always wondered what having a girl would be like and this is just too cute!

ok so cute---and seriously how funny is it that our kids have the same clothes??

this gives me hope...I have a feeling my little girl will be wanting to wear a tutu over the ninja uniform her Daddy will have her wearing!!