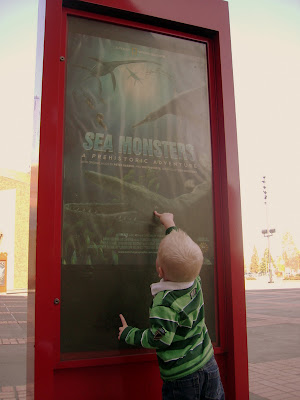 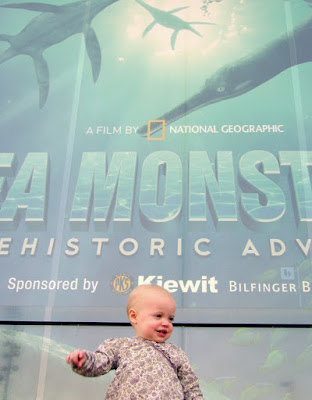 We went to the OMSI for a sweet IMAX movie this weekend called Sea Monsters. The logic went something like this: "Zach loves dinosaurs (LOVES THEM) so he will probably REALLY like dinosaurs that lived in the water... huge ones...on the biggest movie screen he's ever seen! LETS GO!" Well, he was totally stoked until the lights dimmed and the first shots appeared on the screen (not even dinosaurs yet, just the opening yada yada about turning off cell phones)...and he SCREAMED!! ...and he told us he wanted to go home. Dave and I just looked at each other with this helpless, unspoken realization: "WHAT WERE WE THINKING!" (and, "crap, we paid 20 bucks!") Sure enough the rest of the movie was full of prehistoric-ginormous-ugly creatures with big teeth, but we pulled out the secret weapon: skittles. He was fine for the rest of the movie! I think he even enjoyed it! I would totally recommend IMAX for a fun family outing...but next time we are going to see Antarctica...the one about penguins and fuzzy polar bears!

that's hilarious. funny that he was scared---i would think zach, being a total daredevil rockin kid, would love that. i'll keep that in mind when i take ashlyn to see "the ring". just kididing.

I love your posts. You always have awesome pictures and are so clever with what you write. You are such a creative person, and I wish I had a little bit of it. Sorry Zach got scared! Your kids are so cute!