Our first Family picture in Oregon 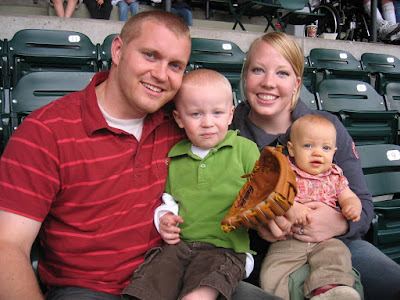 So here we are...official Oregonians! (and official bloggers too!) We are going to try and live it up for the next 7 months or so...you know, see the sights, find some cool things to do! This was a minor league game in Portland...Zach ended up leaving with a ball...not because he caught one, but because a nice old man thought it was cute he spent half the time in the isle holding up his glove "waiting" for a fly ball! (the other half of his time was spent in his chair eating a snow cone!) BASEBALL ROCKS!

So Cute!! I am glad you guys have a blog now!! Did I tell you that we just found out that we are having a BOY!!

Yaaa, I'm so glad everyone is starting blogs. I am pretty good at keeping in touch this way, and I love to see what everyone is doing. I think this is the first picture I have seen of your little Lily. Such a cute little family! I hope you enjoy Oregon! Let us know if you are ever coming through St. George.

hey you!! have a good day. tell zack that ash said waz up

Glad to see you guys are doing so good. I just got on this blog thing and need to post a happier blog soon. anyways your family looks soooo cute! I hope we can stay in touch! love to you and your family!!!